‘Ayodhya’ in Sanskrit means a place where there is no friction or war. But today, this land is bleeding with such disputed atrocities that the name has turned into a misnomer! To ensure that the city rightfully reverts to its gracious glory and proudly lives up to its name, Gurudev Sri Sri Ravishankar had initiated ‘out of the court’ settlement for the Ayodhya conflict in November 2017 and since then, He has been persistently stepping ahead with His noble aim of restoring religious harmony in the holy soil through a confluence of people from all schools of thought.

Lot of curious eyes and hopeful hearts are closely glued to the developments on this front and this is how far the walk of fostering amity has reached: 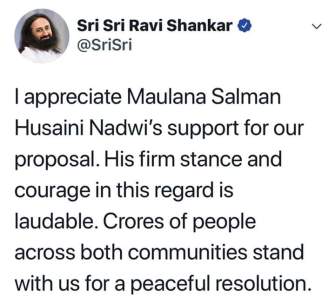 I am fully supportive of your noble efforts and shall always be available at your call. I am very happy to know that your good self is working to find an amicable solution to the Ayodhya issue keeping in mind long term peace & harmony between Hindus & Muslims.

As the matter in hand is taking interesting turns and twists day by day, what really amazes me is the indefatigable mettle and the invincible sincerity with which the ‘Guru who walks the talk’ is floating along the flow of events undeterred by any amount of glitches and impediments on the way!

While the strategy He has devised is an illustration of His profound intelligence, His ideal of taking everyone together through a settlement outside the court is an instance of His heartfelt love and genuine care. His trait of  keeping the gait forward with an unwavering smile is exemplary of His infinite patience and compassion towards the overall well-being of one and all beyond the frontiers of race, religion, gender, position et al! Every move of His, be it in any endeavor ever, always has so much to offer, so much to admire about, so much to learn and much more to wonder about!

Sri Sri’s statement on the rationale behind His vision, “Just by working at the government and bureaucratic level, peace cannot be achieved. Only when there is a change of mindset, peace can be achieved. There has to be a heart to heart talk.” reveals His unparalleled integrity and authenticity towards people’s concerns.

The day is not too far, when the vision will turn into reality and this sacred land of rich heritage will have seen a revolutionary, historical phenomenon exhibiting the spirit of ‘Unity in Diversity’ that it is known for, from times immemorial. Imagine the very ‘disputed piece’ of land that is tarnished with the scars of tiffs and tensions today, will be tomorrow’s glittering ‘souvenir’ of religious brotherhood and social harmony etched into the golden pages of future history!

In this era of ours, on a land that we live, is a ‘never-before-never-again’ kind of lifetime fortune knocking our doors for showcasing the possibility of national brotherhood blossomed to its fullest! Now, it’s our earnest honor and privilege to be able to stand by the magnanimous vision of this magnificent personality to uphold the special spiritual heritage that is the signature hallmark of this soil termed ‘Punya Raama Janma Bhoomi’ in our ancient tradition. Can we afford to miss this historic bountiful opportunity?! Something to ponder about….

One thought on “Tireless and Selfless : The ‘Torchbearer of Peace’ is marching ahead with a firm resolve to ensure ‘Ayodhya’ lives up to its name!”

This site uses Akismet to reduce spam. Learn how your comment data is processed.